When the British Rock Band Isn’t British: The Importance of Brand Positioning

The Importance of Brand Positioning
(psst… it’s for Your Customers!)

There are many reasons why it is critical to create strong brand positioning for your business. From helping your customers have a firm grasp of what you do, why you do it, and who you help, to understanding how to think of you in relation to other, possibly similar companies. Brand positioning is often the forgotten step-kid, the “oh yeah, positioning, we’ll get to that” of branding.

This is a story about how I secretly mixed up a band’s origin and then focused on the band’s brand positioning for the rest of the night. And, more importantly, how you can avoid doing the same thing to your customers.

When I was staying in LA a few weeks ago, my friend texted that she had an extra ticket to go see Albert Hammond Jr.’s band play at the Troubadour in LA. It’s been a long time since I’ve been to a live show so of course I said, yes!

I mean, real questions only, please. Who has time for fake questions, like, “do you want to go see an awesome live band at a cool venue while you’re in LA?

Throughout the day, I listened to the band’s music so I would know a few of the songs. That night we met at the Troubadour, grabbed drinks and chatted while the opening band played. Then it was time for the main act.

The lead singer starting singing and we all danced along.

After the first few songs, the lead sing addressed the cheering crowd. And I paused, suddenly confused. Based on his accent, he was clearly American. Wait what? While this was a solo show, he is normally the drummer for the Strokes. A band I love. A band I had always assumed was British.

My world as I knew it was crumbling. Right there, in the middle of the dark and crowded Troubadour, I pulled out my phone and did a quick search. The Strokes are American. Why hadn’t I done this search before? I was confident in the fact that the band was British. Their music sounded like the other British/European rock bands at the time – the Hives, the Arctic Monkeys, the Libertines, and more.

Although…now that I look it up, I also thought the Killers were British and they’re not either. Clearly I’ve been off the music circuit a while. Or at least I’ve been off this thing called Google a while. Why didn’t I know this? Honestly, all of this is a little embarrassing to admit. Maybe I’m not their target fan base after all. I mean I haven’t been to a live show in a while, but I’m still cool, right? Right? Ugh. Not if this is any indicator.

Here’s the thing, when Albert Hammond Jr. opened his mouth to sing, he didn’t necessarily sound American. Neither do the Strokes. They have the same upbeat rock sound, which I’ve been calling British Rock, but instead is known as “Post Punk Revival”, “Indie Dance”, and “Dance-Punk” (NOW I do my Google search).

Because all of these bands were lumped into a similar genre (and I thought the genre was specifically British), I assumed they were too. In my head, they were all positioned as being very similar.

We do this often in life. We group people, products, services, food, etc. into groups based on our own experience and awareness. As we find something new, our brains make sense of it by classifying it with others we consider similar. We do it with friends, “since I like you, of course, I’m going to like your friends.” We do it with cars, “Since I like Toyotas, I will also like Hondas.” Hell, Amazon even does it for us, “People who liked this product also liked these!” Some people even go as far as, “Starbucks, Peet’s, Any-awesome-local-cafe, they’re all the same.” That last group is blasphemous, but we still respect their opinions.

And more importantly, brands work hard to position themselves and how you think about them, on purpose. Did you hear me? It’s up to companies to tell their customers how to think about them. Whether or not they believe you is an entirely different story. But at least help them understand how to classify you to begin with. Make it easy for them. They’ll appreciate it later, like when they’re in a club confused AF, wondering why the lead singer is American.

Brand Positioning, for the Win

Brand positioning is how you position your company in the minds of your customers. How do you want them to think about you? You want to make sure you are guiding and controlling how your customers thinking of your business. Many businesses create internal brand positioning statements to keep their marketing focused in the minds of their customers. You don’t want them to think you’re just another Brit Rock band, when you’re clearly America’s rebel darlings.

These three points are then combined into a brand positioning statement. For example, “Acme Company provides [target audience] with [benefits/outcomes] . We do this by [proof 1, proof 2, proof 3].”

For our Slay Your Social courses, we would say, “Fueled Marketing provides women entrepreneurs with the skills they need to slay their marketing and grow their business! We do this through teaching essential social media strategies, providing ongoing coaching, and (in some cases), taking over their marketing so they can focus on their business.”

When I recently taught brand positioning in an advertising class, the students were asked how they would position their fake companies. Some students leaned heavily on other brands while others lean on celebrities and sports icons, “We’re the Muhammad Ali of business coaching – we don’t pull any punches so you can get results,” or “We offer lead generation services like the Fast and the Furious – gritty, scrappy, and we come through at the end for the win.”

What does your brand positioning look like? Are you letting people find their way to you through vague not-really-a-British-band “Strokes” type positioning, or are you controlling how people think of your business? If you haven’t already, it’s time to start taking control! Otherwise, your b(r)and positioning might end up in the hands of someone like me, who will just assign you the label of “British” and keep going on with my day. And while you might not mind being British, you might prefer to be defined by other attributes instead.

Latest posts by Kendra (see all)

We're not around right now. But you can send us an email and we'll get back to you, asap. 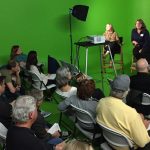